Welcome to March.  During the February Meeting, we had a great discussion on the upcoming Great Lakes HamCom at Michigan International Speedway this fall, October 7th and 8th 2017.  Larry Camp WB8R, the ARRL Michigan Section Manager, presented what the vision is and how our club can support this new event.  We will discuss official support in the March Meeting. 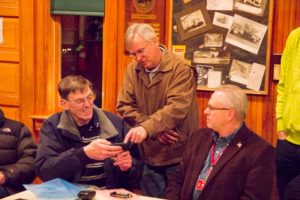 We had a very good turnout at our February VE exam session.  There were 8 candidates with several receiving their first ticket and 2 achieving extra, one of which passing all three tests in this one session!

We had other good discussions during the Meeting, including some on the National Parks on the Air awards earned by Mike Case W8MSC. Mike also reported out on the Winter Field Day event, which generated 105 QSO’s.  He recommended that we consider registering N8SL in LoTW for club events. Eric Stoddart K8ERS volunteered to serve as Field Day Chairman.  He has already begun discussing the plans with those interesting.  He plans to have discussions both at breakfast and at other venue’s.

Other items of interest include measures for emergency preparedness, a topic discussed by Jim Schrot KC8WMW in a prior meeting.  As in previous years, Mike Sharpe W8XH is coordinating support for the Oakland County monthly siren tests.  We had our first outing at the beginning of March.  Frank Maynard NF8M mentioned on one of our Sunday nets of upcoming Skywarn training sessions available in the area.  This all leads into our March meeting topic on Public Service being presented by the LARK President Jim Kvochick K8JK.

Come to the meeting to:

All this fun at one meeting. But wait, that’s not all.

“Public Service – The face of amateur radio in our communities”

Jim Kvochick K8JK, President of the Livingston Amateur Radio Klub (LARK), will briefly describe the agencies and groups involved in applying amateur radio to support the general public.  He will also illustrate what every amateur radio operator should consider in an effort to be prepared and ready to assist your friends and neighbors.

Jim has been continuously licensed as an amateur radio operator since 1968 and in his past has contributed his time and energy in support of relief efforts in Xenia, Willard, Mansfield, and Akron Ohio.

In addition to leading the LARK, Jim is actively involved in amateur radio public service within the state of Michigan.  He is supported by his very understanding spouse, Roberta (K8RJE), and a household of not so tolerant cats.